You may think it is an honor to be called ‘people of the book’.  This is the islamic term referring to Christians and Jews in the Islamic scriptures, but what you are not told is that it is of the lowest infidel ranks worthy of death. These words are written and confirmed in the quran and haddith. They do not want you do know the truth. It’s the perfect term so we don’t start ripping our ‘coexist’ bumper stickers off. It’s a term that pretty much shuts us all up. It’s clear that Islam has taken over many countries and they do so because of the ignorance of the people. You may have heard the term taqiyya or kitman, these are ways of deceiving people for allah, which is allowed as long as it spreads their cause.

It is written very clearly throughout the quran that muslims are each called to fight. In fact, fighting is mandatory. You need to know this and the children in public schools need to be taught the truth.  Students are taught that Jews and Christians are honored as people of the book, they share the same god, allah, they are similar to Muslims, but they have different rights but still enjoy religious freedom in many Muslim countries. This couldn’t be further from the truth, yet our schools continue to teach the lies in ignorance of the truth and people continue to believe every word they hear without searching for the truth.

TRUE DEFINITION of ‘PEOPLE OF THE BOOK’ aka ‘JEWS AND CHRISTIANS’ FROM THE WORDS OF THE QURAN:

You see, it’s not politically correct to say such things, that might offend the muslim. Do you see how twisted the play on words gets? It actually should offend the Christians, but to manipulate and downplay the words of the Quran they stand up and fight back when we quote the true words of Mohammed. This silences the people and opens a door for sharia to come in.

I have met many muslims people and they have been very kind people, but their teachings say another thing. Allah tells them they must fight all unbelievers even if they don’t want to( Surah2:216). I’m not here to argue, but to inform Christians and Jews of the real definition they have of you, that you know they are not to be friends with any unbeliever and each one is called out to fight for allah and his cause. Some will counter the scripture with another and others will say it cannot be translated from Arabic, but if it cannot be translated it cannot be and therefore is not- which it is, so that’s not an excuse either.

If you are a Muslim reading this, this message for you:

For God so loved you, that he gave his one and only Son, that whoever believes in him shall not perish but have eternal life. For God did not send his Son into the world to condemn the world, but to save the world through him. Whoever believes in him is not condemned, but whoever does not believe stands condemned already because they have not believed in the name of God’s one and only Son. John 3:16-18
Isaiah foretold of this:   A child will be given unto us He will be Wonderful Counselor, Mighty God, Everlasting Father, Prince of Peace. Of the greatness of his government and peace there will be no end. He will reign forever Isaiah 9:6-7  Behold the virgin shall conceive and bear a Son, and shall call His name Immanuel which means God with usIsaiah 7:14 “I will declare the decree:
The Lord has said to Me,
‘You are My Son,
Today I have begotten You.
8 Ask of Me, and I will give You
The nations for Your inheritance,
And the ends of the earth for Your possession.
9 You shall break[a] them with a rod of iron;
You shall dash them to pieces like a potter’s vessel.’”Kiss the Son, lest He be angry and you perish Psalm 2:4-12 God has a Son  Proverbs 30:4 Matthew 27:54, These things I have written to you who believe in the name of the Son of God, that you may know that you have eternal life,[a] and that you may continue to believe in the name of the Son of God1 JOhn 5:13, Revelation 2:8, John 3:19,

According to the public school world history books, the definition of people of the book : Jews and Christians who are spiritually superior to polytheistic idol worshippers.

ARE MUSLIMS PEACE LOVING? Verses from the Quran:  “Unbelievers are your enemies” Surah 4:101 “Rouse them to fight for they are without understanding. 8:65 You cannot have a prisoner of war until you have subdued the land 8:67. You must fight all who fight allah 2S196And slay them wherever ye catch  2S191 Fight them and allah will punish them by your hands 9:14 Fighting is prescribed for you, and ye dislike it. But it is possible that ye dislike a thing that is good for you, and that you love a think that is bad for you. 2S216 Fight the cause of Allah to him who fighteth in the cause of allah soon shall we give him a reward of great value 474Fight allahs cause 484Seize them and slay them wherever you get them, we have provided you with a clear argument against them. 491fight those who believe not in allah nor the law even if they are people of the book, until they pay the jizyah with willing submission and feel subdued 929 when you meet unbelievers in fight, smite at their necks, at length when ye have thoroughly subdued them, bind a bond firmly on them. Those who are slain in the way of a. he will never let their deeds be lost Surah 473-4. allah loves those who fight his cause Surah 61:4 and the people of the book , did a cast terror in their hearts, so some you slew, and some you made prisoners. Suah 31

“Indeed, the penalty for those who wage war against Allah and His Messenger and strive upon earth [to cause] corruption is none but that they be killed or crucified or that their hands and feet be cut off from opposite sides or that they be exiled from the land. That is for them a disgrace in this world; and for them in the Hereafter is a great punishment Surah 5 33

DOES THIS LINE UP WITH THE WORDS OF JESUS? “ I say to you, love your enemies, bless those who curse you, do good to those who hate you, and pray for those who spitefully use you and persecute you, that you may be sons of your Father in heaven; for He makes His sun rise on the evil and on the good, and sends rain on the just and on the unjust.  For if you love those who love you, what reward have you? Do not even the tax collectors do the same?  And if you greet your brethren only, what do you do more than others? Do not even the tax collectors do so?  Therefore you shall be perfect, just as your Father in heaven is perfect. 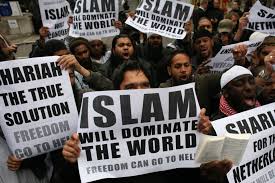 According to the Quran, the muslims believe the following about the PEOPLE OF THE BOOK:

Indeed, the penalty for those who wage war against Allah and His Messenger and strive upon earth [to cause] corruption is none but that they be killed or crucified or that their hands and feet be cut off from opposite sides or that they be exiled from the land. That is for them a disgrace in this world; and for them in the Hereafter is a great punishment. Surah 5:33 (Surah means chapter- all verses above are from quran, their haddith has more)

Wake up!  Read the Word of God and pray for discernment. The Lord has said to Israel – and His word stands forever- He has loved them with an everlasting love.  Jesus said “For assuredly, I say to you, till heaven and earth pass away, one jot or one tittle will by no means pass from the law till all is fulfilled”

At the same time,” says the Lord, “I will be the God of all the families of Israel, and they shall be My people.” 2 Thus says the Lord:
“The people who survived the sword
Found grace in the wilderness—
Israel, when I went to give him rest.”
3 The Lord has appeared of old to me, saying:
“Yes, I have loved you with an everlasting love;
Therefore with lovingkindness I have drawn you.
4 Again I will build you, and you shall be rebuilt,
O virgin of Israel!

For God so loved you, that he gave his one and only Son, that whoever believes in him shall not perish but have eternal life. For God did not send his Son into the world to condemn the world, but to save the world through him. Whoever believes in him is not condemned, but whoever does not believe stands condemned already because they have not believed in the name of God’s one and only Son. John 3:16-18

I marvel that you are turning away so soon from Him who called you in the grace of Christ, to a different gospel, which is not another; but there are some who trouble you and want to pervert the gospel of Christ.  But even if we, or an angel from heaven, preach any other gospel to you than what we have preached to you, let him be accursed.  As we have said before, so now I say again, if anyone preaches any other gospel to you than what you have received, let him be accursed. Galations 1:8

But I fear, lest somehow, as the serpent deceived Eve by his craftiness, so your minds may be corrupted from the simplicity that is in Christ.  For if he who comes preaches another Jesus whom we have not preached, or if you receive a different spirit which you have not received, or a different gospel which you have not accepted—you may well put up with it!1 Cor 11:3-5

Thanks to Tony at My dreams and visions at tpuccio.wordpress.com for sharing above link

This is the very last chapter of the quran, it is surah 114– I thought it was interesting. Muslims believe it says to protect them from evil, but the words are  tricky. It’s as if the true author of the book is revealing himself:

“I seek refuge in the Lord of mankind,The Sovereign of mankind.The God of mankind,From the evil of the retreating whisperer -Who whispers [evil] into the breasts of mankind -From among the jinn and mankind.” (jinns are spirits)