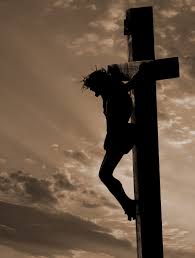 A great heavenly host of angels, the prophets, the forefathers, Abraham, Isaac, Jacob, and the Archangel Gabriel and all of Heavens armies surrounded the cross at that moment. They watched as the Son of God was tried and beaten throughout the night, they watched as He carried the cross. When He was nailed to the cross, the entire heavens stood silent. A great silence and stillness covered the heavens as tears slipped down their faces, their fury held back as they watched the Savior suffer in utter torment. Abraham watching his children spit and strike the Lord, the angels wanting desperately to rescue Him, and the prophets of old bowing their heads with broken hearts as they all watched the Son of God, Jesus Christ, the Lion of tribe of Judah and the King of kings descended from the line of King David, nailed to a cross. The savior of the world in deep abandonment, sorrow, pain and rejection. He took the punishment I deserved. On the cross for 6 hours and after 3 hours of complete darkness, they heard the Lord cry out “Eloi, Eloi, lema sabachthani?” which means “My God, my God, why have you abandoned me?” and then another cry “It is finished!” He bowed his head and released his spirit. It was done. He died,  the earth quaked, graves opened, the dead came back and were seen among the living, The soldiers gasped and fear and exclaimed ” Truly, this was the Son of God!”. The thick veil in the temple tore in two, earth shaking, sky pitch black darkness, fear in every heart, walls crumbling, dead digging their way out…… and the proclamation echoed out:

“See, my servant will prosper; he will be highly exalted. His face was so disfigured he seemed hardly human, and from his appearance, one would scarcely know he was a man. FOR HE  will startle many nations. Kings will stand speechless in his presence! For they will see what they had not been told; they will understand what they had not heard about. And because of his experience, ” My righteous servant has made it possible for many to be counted righteous, for he has borne all their sins. I will give him the honors of a victorious soldier, because he exposed himself to death.” He was counted among the rebels. He bore the sins of many and interceded for rebels. He has opened a new and life-giving way through the curtain into the Most Holy Place. Amen!
He has made the people holy by the blood He shed, He has now become our High Priest. He has entered that greater, more perfect Tabernacle, which was not made by human hands and is not part of this created world. With his own blood—not the blood of goats and calves—he entered the Most Holy Place once for all time and secured our redemption forever so that we can worship the living God. For by the power of the eternal Spirit, Christ offered himself to God as a perfect sacrifice for our sins. He mediates a new covenant between God and people, so that all who are called can receive the eternal inheritance God has promised them. ”

As He released His spirit, He was taken up into the arms of the heavenly host who quickly gathered around Him and held Him with great love, comforting Him. – Yet, we know He did not ascend to the Father as yet, because after His resurrection, He told the disciples not to touch Him because He had not yet ascended to the Father. Remember what Jesus said- the only sign given to them would be the sign of Jonah, just as he was in the belly of the whale for 3 days and 3 nights so the Son of Man will be 3 days and 3 nights in the heart of the earth.  Moses and Elijah were there to witness, they had met Jesus before hand at the Mount of transfiguration to discuss what was to come. Jesus had a mission…. At His death, He disarmed the powers and authorities, he made a public spectacle of our enemies in high places! For He, our redeemer, triumphed over them by the cross.

Jesus Christ, Savior of the World, was given ALL AUTHORITY  in Heaven and Earth from God the Father. He has the keys to Hades. While in the heart of the earth, He went into the dark abyss with a mighty angelic force behind Him. Entering into the gates of Hell Proclaiming freedom every captive “ You have been set free! I have come to save You! Your Father in Heaven has sent for you!” His voice like thunder echoing throughout for every man and woman to hear. Teaching and preaching to them the Good News. He walked through the gates of Hell and throughout the pit of Hell, making sure He spoke to everyone who had ever been created, gathering as many as He could. Demons surrounding Him silenced in His Power unable to speak and filled with weakness, trembling in His presence. The Savior, full of power and authority continued showing the captives His hands and feet, showing everyone what our Savior had done so they could be set free. Many called out to Him, grabbing on to Him, following and believing, but yet others – in anger like the Pharisees, mocked Him and treated Him as the people of the world treated Him. Just as the Pharisees knew He was God and choose to reject Him for their own pride, status and evil hearts, so some of the people in Hell also treated Him.

So the Lord Jesus took His captives to freedom as they He gathered them into the Heavens, out of the pit of torment and dread that was supposed to be eternal for each one of them. As they reached the Great Throne room before the Lord God Almighty, the Lord’s heart leaped for joy to see His children. He gave each one a Great Embrace as is they were the only child of the Father- telling them- “ My Child, I have always loved you with an everlasting love. Since the very beginning, even those of you who died in the flood during the days of Noah, I have never forgotten you. You have never left my mind. I am filled with Joy that you are here with me. I have a place prepared for you.” ( God never forgets you)
Jesus came back to earth to see and talk to His friends giving them instructions and proving that He is the Son of the Living God. After that, He was taken up into the Heavens where He sits today at the right hand of God the Father. The heavens, the freed captives, and the angelic host filled the heavens with great Praises to the King of Kings and they have never stopped – even unto this day- I can still hear them sing praises to the new born king, Peace on earth, goodwill toward men, Christ was born in Bethlehem -the praises to Him ring forth forever and ever.
Amen and Glory Hallelujah! Our King is Risen. 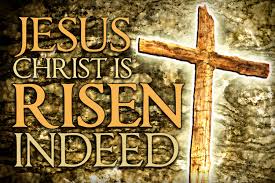 So he went and preached to the spirits in prison—  those who disobeyed God long ago when God waited patiently while Noah was building his boat. Only eight people were saved from drowning in that terrible flood. And that water is a picture of baptism, which now saves you, not by removing dirt from your body, but as a response to God froma clean conscience. It is effective because of the resurrection of Jesus Christ.  1 Peter 3:19-21

Sunday Morning: Jesus said, “Do not hold on to me, for I have not yet ascended to the Father. Go instead to my brothers and tell them, ‘I am ascending to my Father and your Father, to my God and your God.’”JOhn 20:17

INDEED HE HAS -Aléthos Anesti !!
Christ is Risen!
In the Greek tradition, we crack eggs each Easter. One person says “Christ is Risen” and the other says “Indeed He has” and we smash eggs. (Its a fun time for the family and each year there is a winner)Legend has it that eggs were brought to the tomb by Mary that special morning.The eggs are dyed red in remembrance of the blood of Jesus, the shell represents the tomb that couldn’t hold Him, the smash of the egg is in remembrance of what Jesus did to the power of the grave by disarming the powers and authorities, making a public spectacle of our enemies. Amen!